A hand wraps around my wrist. My heart rate soars as he prevents me from getting away. No, don’t do this now. We’re in the middle of the crowd milling around the carnival on Main Street. I tug my hand away but he refuses to let me go. He pulls. I turn and tumble into his strong arms as he holds me tight. I face a wall of solid muscle. I closed my eyes. Hold them real tight. I hate this. I hate the panic rising from within, the need to scream and make it stop, and even when his finger tucks beneath my chin and tilts my head towards his face I can’t look. I’m too frightened to open my eyes. What if this time it’s not John who’s got me?

“Faith?” I hear the right voice. I know the familiar feeling of these arms and they will always protect me. Yet still my heart races. “babe” He’s not always this patient. Sometimes he shouts and tells me he’s not Cal. But some days my head just doesn’t want to believe it. “Faith, come back to me.”

My breath stutters and then stops entirely because I have to face reality. But the fear still grips me oh so tight. What if… I open my eyes.

John smiles at me and his gaze holds mine in place. I breathe. The tension seeps away. “Darlin’” He whispers and somehow he knows to step back, to keep me at arm’s length. “Babe I didn’t tell you, did I?” His fingers entwine with mine. He has this amazing ability to make me feel like my past never happened. “You are the best thing to ever happen to me.”

The butterflies take flight inside my belly and for a moment I just feel the warmth of his gaze and the love in his touch and my world slots back into place. Now I feel comfortable enough to tease him. “What about Lisa?” His daughter “Zoe, Cate, Caleb, Georgia” My children “and Darryl?” and My baby brother.

John’s eyes shift away as he pretends to ponder the point, pretends to be perplexed by a tug of war inside. Then he laughs and it’s a wonderful sound. His smile lights up his eyes. “Mrs. Dixon that was hideous of you!”

Is this really my new life? I have to mentally pinch; just to remind myself that it’s not new anymore. It’s been years since his brother Drew arrested my ex. It’s our first wedding anniversary in a few weeks’ time and we’re celebrating at the cabin in Washington.

“Four years ago today” He begins and the music and merriment of Fourth of July celebrations around us just fade away. At this moment, it’s just us, and we’ve been frozen in time.  “We stood in this very spot and I said to you ‘when life gave you lemons’ and you said ‘you’re supposed to juggle ‘til you drop them’”. I know I remember. He sent me the most dazzling smile as he looked over his shoulder at me. “You smiled at me, do you remember?” I nod because it really was magical stumbling into Hawthorne Creek and finding a home, even though that day had gone so horribly wrong halfway through. “I think I toppled headlong in love with you at that moment Faith.”

Oh, I feel all glittery inside. He almost always knows exactly what to say to chase my demons away. I know I don’t say these words enough to him. “I love you, John.”

He reaches for me, his big hands cup my face and he steps into the gap between us. I close my eyes and anticipate the most perfect moment ending with a heart-stopping kiss.

“Mom!”The bubble burst. We both deflate in disappointment, look each in the eyes and a laugh tumbles from deep within. “Bloody kids!” John shakes his head.

“Dad!” Caitlyn shouts and I watch John swell up with pride. Cate made the decision to call John ‘Dad’, and she no longer wants to see Cal. She’s far wiser than just twelve years old so what was I to say? I think she’s big enough to make that choice.

“Hurry up Uncle D!” Lisa is dragging my brother along by his hand. It’s so wonderful to see them embrace him like this because we were apart for most of their lives.

Then Zoe appears. She mimics the gypsy fortune teller whose authentic caravan is set up on the outskirts of the stalls, and she asking her will she become a famous actress. The fortune-teller replies “I see stars in your eyes, dear child.”

“Tell her what you told Uncle D!” Cate grins.

“She said he wasn’t going to get married for a real long time.” Zoe interrupts. I looked at his fiancée at his side. She’s wearing an expression mixed with annoyance and concern. “and they’re going to have a baby-”

“She said, daughter.” Cate corrects. “Everyone is going to know his name too! Uncle D’s going to be famous.”

“Infamous.” Cate corrects again. I know it’s futile to believe, she been around all day and has probably observed us all. Besides D owns one of the biggest chains of health and well-being practices in the state of New York and his fiancée is a popular girl. They’re already well-known to those who read society pages. I’m not surprised his name is going to be infamous in the future. He has big plans for the psychiatry practice started by our Dad.

“Do mommy!” Zoe demands. And the woman gives me an unnerving stare and suddenly I don’t want to know my future. I shiver and wave her away. “Please,” Zoe begs.

“My dear” she takes my hand without my permission. “I see a lifetime of sorrow in your eyes.” Her words crawl along my spine. I try to tug my hand away but she holds firm and closes her eyes. “Shadows have been cast around you but I still see you standing in the light.” She falls silent for a few moments. “Your future is intertwined with a young boy. Maybe a son?”

My heart stops and I swallow before I look at John. He’s gone a ghostly shade of pale. He shakes his head. And I agree. We’re not having any more kids!

My gaze lands on Darryl… and voila! The boy too old to be my son. This is nothing but a party trick.

“Oh” She opens her eyes. “Dear girl. You’ll never see how important you are.” She takes John’s hand and joins our palms together. Her gaze switches between us both. Then she casts her eyes to the floor. She shakes her head and when she looks up there are tears in her eyes. “You’ve further heartbreak on the horizon.” She whispers. “This is something you will face alone.” John’s other hand wraps around my waist as I try to tug away my hand again. “I want you to understand you need not worry, you have made the right choices and taught them to true value of family.”  She pats our hands and turns to walk away.

John reaches out and grabs her shoulder. “What do you mean? What did you see?”

I wrap my hands around my waist grabbing hold of John’s hand as he snaps “What kind of flowers?”

She shakes her head “I don’t know. They were white. Lillies I think.” I gasp. They’re the flowers of death. “It was a very brief glimpse. They have even been roses.”

White Roses? My blood runs cold. How did she know? We’d told no one about Cal’s threat. “Charlatan!” John shouts and she cries out, shaking her head furiously. “How can you say this stuff in front of kids? It was him, wasn’t it? Did he send you?” John’s livid he’s almost foaming at his lips. “I’m calling my brother and reporting his threats. So if you want to avoid fraud charges you’d better get in that caravan and get out of this town right now.” She scurries away “and you give him a message from me.” His voice grows louder the further away she runs. “If he touches my wife again I’ll kill him!”

“John!” I touch his shoulder. He’s so mad he’s trembling under my hand. “It’s nothing but hocus pocus,” I tell him even though I’m trembling too. But the look on the girls’ faces, they’re so scared they’re clinging to Darryl and he holds them so protectively. He’s worried. His eyes are questioning me. I’d argued with him when the white roses arrived. I told him not to worry. They all need our reassurance after John’s outburst. Everything is going to be fine. He’s not allowed anywhere near here and Darryl takes Zoe to see him. I will never see Calvin McKenzie again. “She read our reactions. It’s a scam, a carnival trick, a way to make a quick buck.” But I can’t fight the sickly feeling growing in my stomach. We didn’t pay her a penny.

He wraps both arms around me. He holds me ever-so tight. “You’re right.” We stand in silence and nobody moves. We’ve all had a terrible fright. “I overreacted.” John kisses my cheek and says “But still, I’m seeing the doctor tomorrow.” I frown, then start to chuckle. “I thought you said god loves your genes?”

“He might but five kids and a little brother are enough kids for me thank you very much.”

“Hey!” Darryl cries, my three girls are yet to move away from him. “Less of the little. I’m thirty-three years old, you know!” 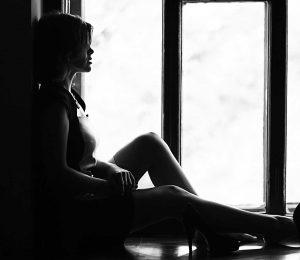